Featured image: Celebrating a family reunion: Mapetla Mohapi (right) at his home in Sterkspruit, Eastern Cape. Seated next to him, in the white shirt, is his father, Mr Manoe Mohapi. Mapetla’s wife, Nohle, is in the centre, standing with her hands on her waist. Mapetla’s mother, Grace, is holding Motheba, his eldest daughter, on her lap. (Photo supplied)

Mapetla Mohapi, a director of Zimele Trust, which saw to the welfare of ex-political prisoners and their families, secretary of the South African Students’ Organisation and a member of the Black Consciousness Movement, was detained at the Kei Road Police Station in the former Transkei by the apartheid regime on July 16, 1976 under Section 6 of the Terrorism Act. He was the first person to be detained under that particular section of the Act. Twenty days later, on August 5, Mohapi was found dead in his cell. Police produced a forged suicide note to cover up the murder of 28-year-old Mohapi. (Photo Supplied) 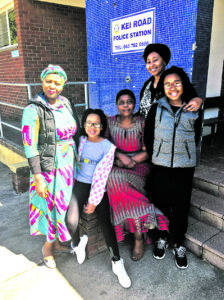 In August 2017, Mrs Nohle Mohapi (seated) visited the Kei Road Police Station in the Eastern Cape where her husband was kept in detention for almost three weeks until his death. The apartheid police faked a suicide note to cover up their role in his killing. The station commander at Kei Road denied the family access to the cell where Mapetla Mohapi’s body was found. Accompanying Mrs Mohapi were her daughters, Motheba Mohapi (left) and Konehali Gugushe (right, rear) and grandchildren Naledi (second from left) and Mizuku Gugushe (right). (Photo Supplied)

THE failure by government, since 1994, to prosecute apartheid-era killers perpetuates the falsehood and lies of the apartheid regime, asserts Konehali Gugushe.

Mohapi’s killing was officially recorded as the 25th ‘death in custody’ during apartheid South Africa.‘Corruption: An obstacle to social and transitional justice’ was the theme of the virtual lecture, which was also addressed by Nkosinathi Biko, son of Steve Biko who was killed in detention on September 12, 1977, and the Reverend Chris Nissen, of the South African Human Rights Commission. Gugushe is the CEO of the Nelson Mandela Children’s Fund (NMCF).

‘The various organs of the [apartheid] state colluded to make sure that no one was held accountable for the crimes they committed,’ Gugushe declared.

‘In the case of my father, a fake suicide note was produced indicating that he was going to take his own life.’

Mohapi’s family challenged this account by the apartheid regime and engaged the services of a handwriting expert who confirmed that the handwriting and signature on the note were not consistent with that of Mohapi’s.

Various unexplained bruises were also found on his body.

‘Despite all this evidence, the [apartheid state’s] various experts, from police, investigators, medical practitioners, pathologists, right up to the judges, colluded to make sure that the outcome they achieved was “Suicide By Hanging”, as the official record.’

Gugushe added that the apartheid system allowed ‘criminals to get away with murder, robbing ordinary people of their lives, and robbing the remaining ones of the sense of justice.’

She linked the impunity that apartheid-era killers enjoyed because of the inaction of post-1994 governments to the failure by the state to act against rampant present-day corruption as exposed by the State Capture Enquiry and revelations of crooked COVID-19 procurement deals.

‘These criminals believe they can get away with anything because the state is incapable, the state is unwilling and the state will not hold anyone accountable.

‘This points to the erosion of our justice system.’

She said that this was the reason that ordinary people no longer had any confidence in the government.

‘It cannot be that we, as South Africans, can be defined as a nation that suffers wrong-doing but is never able to hold the perpetrators accountable.’

Gugushe said that there were people in power who are able to change this.

‘I implore the NPA [National Prosecuting Authority] to show the will to undertake the investigations that they should, to allocate the appropriate resources and prosecute the people they need to.

‘The culture of concealment, of protecting nameless and faceless people should end.’

She said that while doing the work of the NMCF, a legacy organisation founded by Nelson Mandela, she often asked herself: ‘How do we celebrate our heroes and their legacies when we continue to live the injustice perpetrated by the apartheid regime and continued by this government?

‘How do we make sure the legacy we leave is a legacy rooted in truthfulness, rooted in seeking justice and delivering justice at all cost?’

‘Every year, when we observe the anniversaries of the death of our loved ones, the sense of anger and the sense of resentment deepens and becomes stronger.Speaking about her personal anguish, Gugushe said: ‘When my father was killed, I was seven months old and now, 44 years later, I have still not been able to find peace with his death.

‘This is because we have not been served appropriate justice.

‘This is something that should change.

‘This cannot be the South Africa we accept.’

Gugushe called on the government not to ‘perpetuate faleshoods and lies. When new information that comes up [about apartheid-era killings], researched by affected families, we don’t expect that to be overturned by findings that were rooted in lies and corruption.’

She made an impassioned plea to those in power: ‘And so, today, as we remember our heroes like Imam Abdullah Haron and my father, Mapetla Mohapi, we implore the state to do what is right.

‘We hope the NPA will actually take up these cases [of the apartheid-era murders] and investigate them thoroughly and appropriately.

‘And to do so before it is too late.

‘To do so within our own lifetime!’

This article was first published in the October 2020 print edition of Muslim Views.

The unfinished business of the TRC